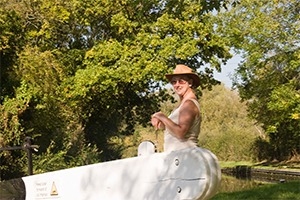 I probably took my first photograph at the age of 6 using a Box Brownie, the subject being my teddy bear sat in his own little deck chair.  This photograph was unique as it was my first and last attempt at portraiture.

Over the years I have moved from film, and the chemical darkroom were I experienced the magic of seeing an image appear in a chemical bath, to ‘The Digital Darkroom’. Since turning to digital I have developed and printed all of my images, this way I have total control over quality; resulting in the production of quality Fine Art Prints.

I started my working life in the computer industry and found it a natural progression to begin exploring the potential of packages like Adobe Photoshop.  The mention of a powerful editing package often starts a heated debate on how much editing should be applied to a photo.  My personal opinion is that a photograph should  represent what you (the photographer) remember seeing at the point of ‘going click’.  The most important word in that last sentence is ‘remember’.  As the camera cannot capture what the eyes actually sees, it is essential that the raw image is developed to record how the eyes and brain interpreted the scene; whilst depending on ones own memory to accurately recall the event.  Not an easy task, especially if you have a memory like mine!  As far back as 1858 a photographer called Henry Peach Robinson used 5 separate negatives exposed onto 1 sheet to create the photograph he wanted.  Sounds very much like our handling of the High Dynamic Range photos of today.  More recently the well-known and revered photographer Ansel Adams stated that he developed the image Moonrise, Hernandez, New Mexico differently on several separate occasions, to produce very different interpretations of the same scene.  (Adams, A. (1990) An Autobiography, Little, Brown and Company, p274).  Whilst the old dodging and burning etc that took place in a dark room has largely been replaced by the editing that software can accomplish, I doubt that the actual time spent on the lengthy process has changed, as my ‘long suffering’ husband might testify.

For the past six years I have lived on a canal boat with my husband and enjoy exploring the inland waterways and the photographic opportunities that they provide.  Through the changing seasons and the way in which the ever-changing light can totally transform the physical world in which we live, it often takes a lot of patience (along with some very early mornings to catch the first rays of the days light) to see the view that I wish to attempt to capture. However, nature rarely disappoints. My interest in capturing the images that were around me at the age of 6 has now grown into a passion to perpetuate, through Fine Art Prints, the beauty that still exists in our fragile world.